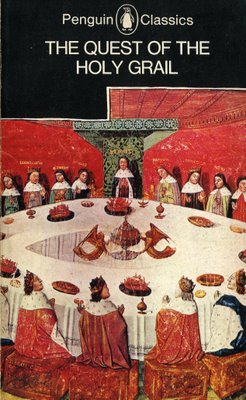 "...It seemed to Sir Gawain as he slept that he stood in a meadow of greenest grass all studded with flowers.There was a hayrack in this field where a hundred and fifty bulls were feeding.The bulls were proud, and all but three were dappled. Of these three, one was neither truly dappled nor truly white, but bore traces of spots; and the other two were as white and resplendent as they could be.These three bulls were coupled together at the neck by strong, unyelding ykes. The bulls exclaimed in a body: let us go farther afield to seek out better pasture!
And with that they all moved off and wandered, not in the meadow but out across the moor, and were a long time gone. When they returned there were many that were missing, and those that came back were so thin and weak they could hardly stand.Of the three withou spot, one returned and the other two stayed behind.When they were all assembled round the hayrack they fell to fighting among themselves till their fodder was destroyed and they were forced to go their several ways.
Such was the vision of Sir Gawain."
Posted by Yvette Centeno at 1:08 AM