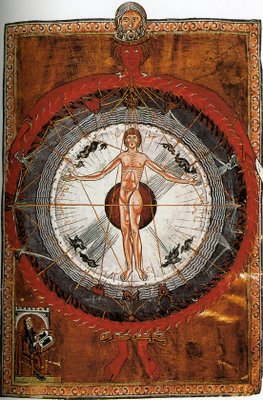 The Book of Divine Works ( Visions ) presented and trans.into French by Bernard Gorceix, 1982

Hildegarda von Bingen was the great Saint and visionary benedicitine of Middle-Age Germany. Her importance and influence has now finally been recognized by scholars in this 20th. century. She lived in the same century of Bernard de Clairvaux, she was well aware of the Cruzades, friend to Emperor Barbarossa, counselor to Popes and Cardinals among many others that looked for her wisdom.
The Book of Divine Works was her last. As a prophet she depicted ten visions where she exposed the creation and divine order that presided to it - being God, nature and man the forces and principles to be understood in a mystical way unknown until she first presented them.
As Bernard Gorceix writes in the Introduction to the book, Hildegarda belongs to the Panthéon of German culture as Meister Eckart or Duerer or Boehme do, each in their own right.
She was born 1098 ( first croisades in Syria ) and died 1179.
In between she was told to write , about the visions she "heard and saw", by a voice that for her was the voice of God.
Bernard de Clairvaux also incited her as "fille bien-aimée en Christ" ( daughter loved by Christ ) to obey "with all her love to the divine grace bestowed upon her". The Pope Eugene III does the same, when presiding a synod in Trèves ( 1147-48 ). Until now more than 300 of her letters have been studied, showing how this woman travelled, interfered, intervened in wordly as in divine matters, with great courage, when dissenting, and firm conviction of the truth she was supposed to reveal.
We will find her contacting or being contacted by dignitaries from England, Netherlands, France, Switzerland, Italy, Byzantium. She wrote a letter to Henry the II of England by the occasion of the murder of Thomas Beckett (said to repent quite quickly) another to Léonor d'Aquitqine, put in prison in 1172, and even to the Empress of Byzantium.
Her works occupy an antire volume of the Patrologia Latina by Migne ( n.197 ) .I referd the letters, but we have to consider poetry, Lieder, plays, works on science and medicine etc. She had a vast, universal culture, on the trivium and the quadrivium.
As for the visions:
SCIVIAS, written 1141-1150
LIBER VITAE MERITORUM, 1158-1163
LIBER DE OPERATIONE DEI, 1163 or 1170-1173

All those books are kept with their magnificent illuminures, the Book of the Works... being kept in the italian city of Lucques,in the Bibliotheca Governativa.
This book is considered by scholars a theology of the cosmos : a cosmic theology.
Living in the 12th. century she could feel the intense intellectual activity of Saint Albert, Saint Thomas and Saint Bonaventura.
We have also to think about Joachim de Fiore, who died c. 1202, and his LIBER FIGURARUM that would have vital importance for the messianic ideas later developped. Even Lessing, in the 18th.century will quote de Fiore.
From Toledo, Palermo, Salerne, flow at the time many treatises on the Physica- cosmological and phisiological matters are discussed and acquiring great importance.
Hans Liebeschuetz argues that the Book of the Divine Works could not have been written without the influence of oriental, iranian and gnostic cosmologies ( cit. Gorceix, p.xxxiii ). And that certainly makes great sense, when we read the texts and see the images.
Hildegarda says she worked seven yeras on hre book, with the precious moral and intellectual support of a young monk she praises, named Volmar. She gave him all her her confidence, he really was the one that helped.He lived in the monastery of Disibodenberg, she was in the monastery of Rupertsberg, and both worked together, as she tells, "to show the occult marvels". Volmar was considered a very good latinist, that would be one of the reasons why he could help polish the difficulties of a rougher expression (Hildegarde complained about her 'ignorance' in latin, but that could also be a gesture of pretense humility not to humiliate still more the scholars of the time ! ).
So: let's imagine the couple, as later alchimists couples were depicted, in Flamel or in the Mutus Liber, working syde by side on the eternal Opus of their lives, meaning the understanding of the secret mystery of Creation and the place of man in it.
In one of the pictures of SCIVIAS the young monk is shown behind the chair of the saint . And leaving no doubt about the veritas of what is being said, she casts a sort of spell in the last paragraph of the Book of The Works:
"That nobody dares to add or to take away in any sense what here goes written, if he does not want to be eliminated from the book of life and from all terrestrial happiness " (cit. Gorceix, p.xxxviii).
In another of the Book's illustration we can see the nun's head under a big red wave while writing with a pen on an open book whose pages are not white, but BLACK.
This is taking us to the next post, on the black colour.
( cont.)
Posted by Yvette Centeno at 7:13 PM