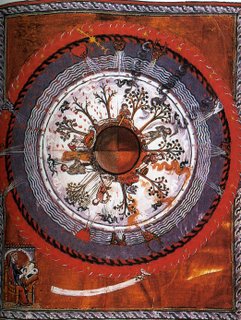 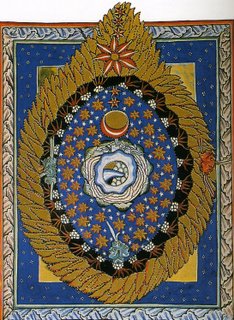 According to the critics, many of Hildegarda's visions, that she ascribes only to herself, could be traced back to ancient texts already well known, as is the case with HERMAS ( not Hermes ) celebrated all through the first centuries of our era. There are many similar aspects to both visions. She was also probably acquainted with the apocaliptic traditions of the hellenisitc judaism , the IVth. Esdras and the I. Henoch. Also the Bible, of course, but that would be only natural.
Every one of the nun's texts insists upon the contrast between the Despair that precedes revelation and the Sublimity proper to the Illumination.Those are the contraries to be depassed.
She expresses those sufferings as "calcination", having experienced them herself. Calcination, a very important image- linked to the state of NIGREDO, the black depression of a soul in despair.
In a letter to Guibert de Gembloux she will write: "the light I contemplate is not coming from space....I cannot measure the height, the width or the length.I'm told it is 'the shadow of the light of life'...the words, in this vision, do not sound like human voice, they are like a flame with lightning...I cannot recognize the form of this light..."
Gorceix comments that" such light hides its opposite, the light of life"(Présentation, p.xli):
And so it is, in Hildegarde's description:
" In this light I sometimes see, but not always, another light that I'm told is the light of life....While contemplating it, all sadness and anxiety leave me: I feel like I am a young girl and not an old woman anymore".
She is, in her own way, reading the book of life.
She does not feel the rapture of such mystics as Mechtilde de Magdeburg, taken to the desert or the heart of deity, wanting to stay there forever, and she doesn't feel either the "débordement" as Gorceix puts it, of the Spanish greater mystics. Her visions do not make her lose her spirits, her consciousness, as she critizes the "cathars" of doing.
"I've received my visions due to heaven's mysteries, fully conscious, in a total awakening of my body..." she says " I testify according to the universe of man's perceptions".
How near, I'm finding, to Saint Thomas, seeing and touching to confirm his own visions...(that should take us to Maso di Banco and his marvellous picture, and understanding of the miracle).
We have spoken of the image of the black pages of the book she is writing, submerged by a wave of red colour.The black symbolizes life, whereas the red wave is already telling about the sublimity of understanding (it's on her head ).

The Book of God's Works contains ten visions, ten descriptions that do not pretend to be moral, just inspiring and illuminating, as true visions are. We shoud not look for logic, but for beauty. Also for love, the greater concept it contains,
for love is the true link between the world of matter, human life, dark as opposed to divine life, the white spiritual sphere where God dwells.
The second vision in the Book is the one that matters for us when discussing the black colour of the sphere of fire.We have seen it in the previous post on Hildegarda. She develops here with detail his vision and conception of the two fires, the black and the white one, fused in their substance and being at the origin of the primordial creation of the world.
Two images are given with special force in Hildegarda's visions:
the image of the egg of creation, in the book called SCIVIAS ;
and the image of the circle, the wheel, as the wheel of creation, moved by love in the BOOK of GOD'S WORKS I have been reffering to.
The description of the second vision in this book is rather large, and difficult for me to translate. I'll leave the indication of scholars having dealt with this magnificent nun's work: Bernard GORCEIX, for French, and Peter DRONKE,for the English world.
Very briefly, I will say that man is described as posessing a powerful energy, placing him in the center of creation, assisting and being assisted by it, according to the principle of of God. The wheel in the man's chest signifies, as does the egg, that this form of the world exists eternal in the knowledge of the true love that God is.
Love is perfection in the symbolic form of circle, wheel or egg. And God is love.
As to the fiery circle: it means that fire, the first of the elements, goes up, for it is light; but it includes all the other elements, illuminating them. It is a symbol of God's power, who is above everything and everybody and bestows life on the whole of creation.
Under this circle of illuminated fire theres is another one, a circle of black fire, submitted to the first; it means the fire of judgement, for the punishment of the evil.
But, as Hildegarda also points to attention, the two fires are united in the same one circle, meaning that Power and Judgement of God are united in the same and one Justice, they are not separated from one another.
This fiery spheres, the brilliant white one and the black surmount the ethereal pure one: in its roundness it embraces the whole world; it keeps everything from both spheres, black and white, meaning that there has to be a perfect order and measure in the Judgement : repentance limits the punishment of the sinner.
Man is placed in the centre of the World's wheel, he is the one chosen to make it move, helping God with the eternal creation.
Love is the unbreakable bound.
Posted by Yvette Centeno at 1:05 AM