Fruit and Vegetables for Gawain 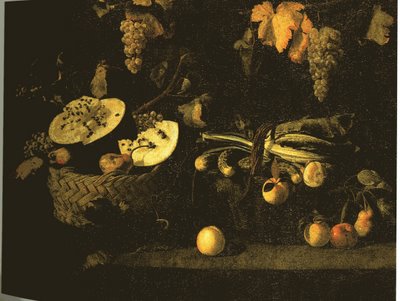 Fruit and Vegetables for Gawain, the brave champion of art and beauty in the world. I think he does not eat properly, although I would not advise him to eat as the Portuguese did in the 17th. century.
This is a Nature Morte aux paniers de fruits et de légumes, by Baltazar Gomes Figueira ( Óbidos, 1604-1674 ).
The interesting thing about it is the combination of colours, and the symbolic meaning intended, a mystical and moral one, according to the" Treatise on the meaning of Plants, Flowers and Fruit " by Frei Isidoro Barreira, published in Lisbon,1622.Such figuration of the flora was above all meant " to gratify the Christian Religion ": melon signifying taste and sweetness, apple the discord, grapes the joy of communion, orange the beauty etc.
It may be true, but I also believe the monks would also eat with their eyes when fasting according to conventual rule, and that is certainly one of the reasons for the numerous natures mortes in this century, after the Counter-Reformation.
Posted by Yvette Centeno at 1:37 PM

They look delicious. And yes, you are right, the fruit here is rancid, I could really use those. Thank you!